The castle itself houses the Medieval Warfare museum. The museum’s collection includes more than 250 weapons and pieces of old armour. Swords, crossbows, staff weapons, chain mail and a ribaudequin are exhibited in the seigneurial lodgings of the fortress.

Furnishings from the 14th and 15th centuries complete the collections. 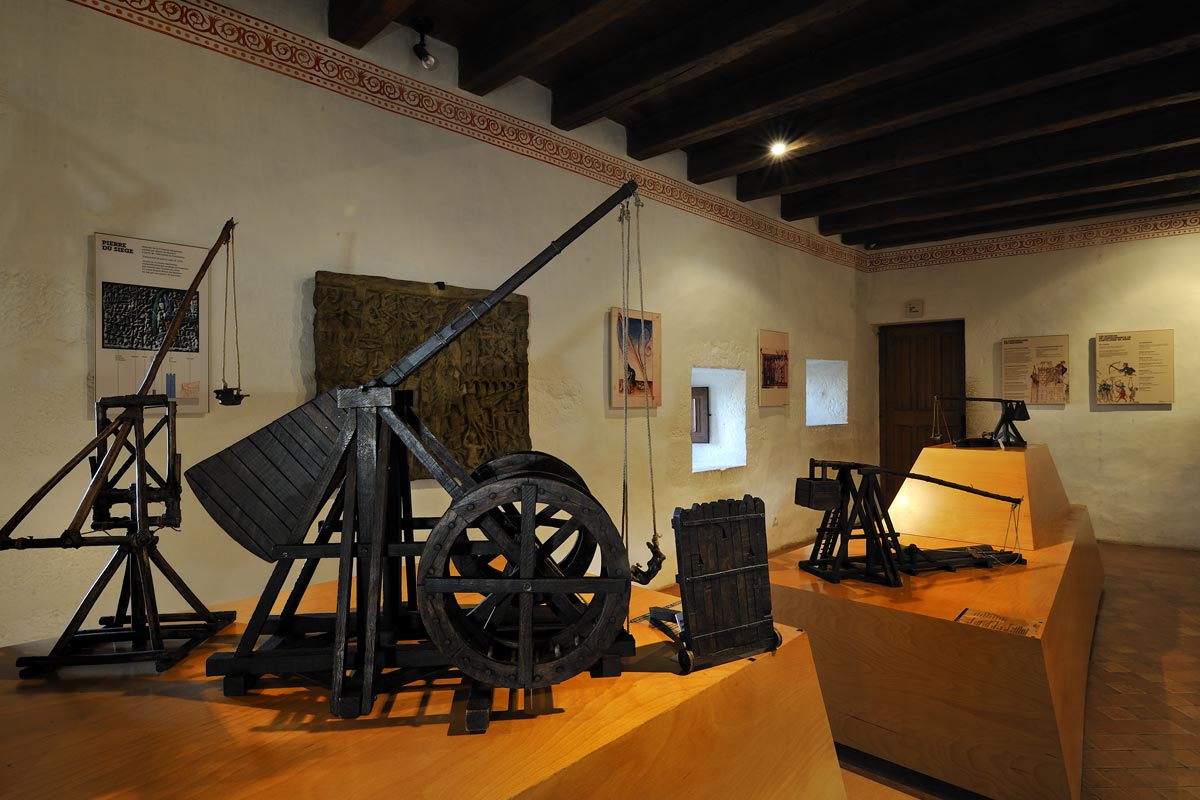 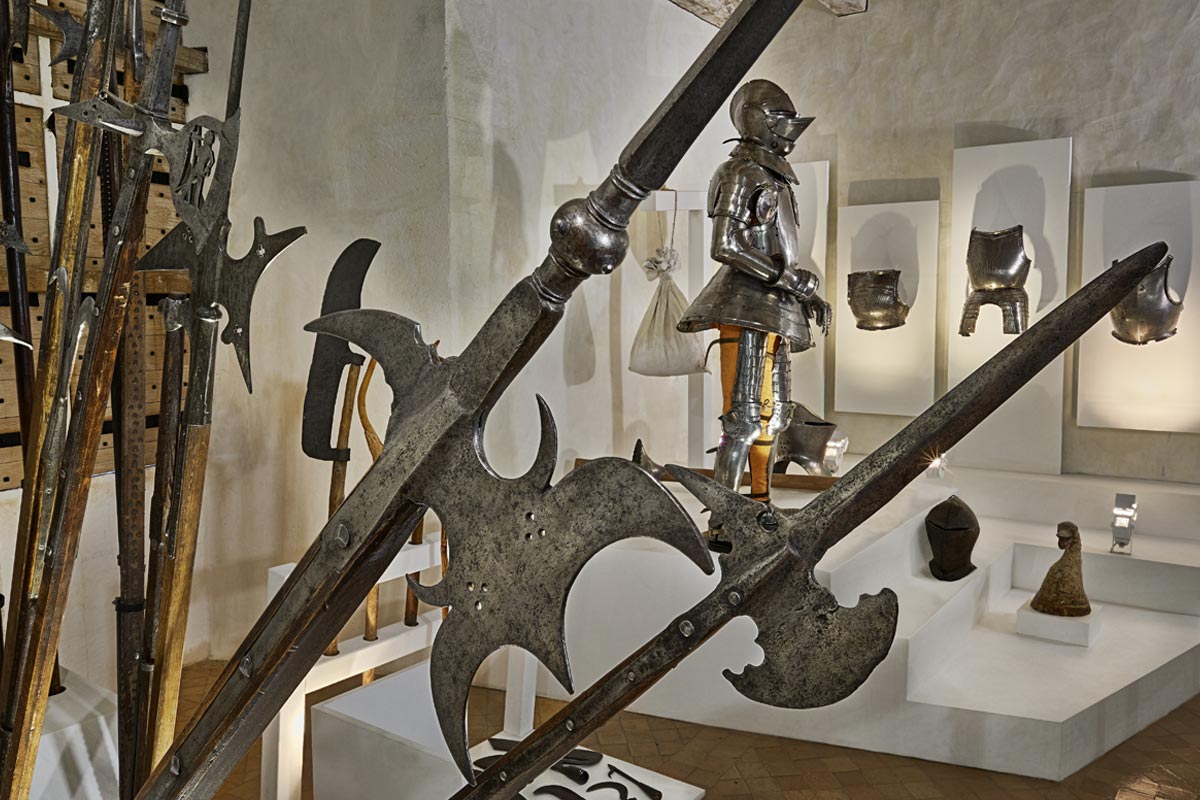 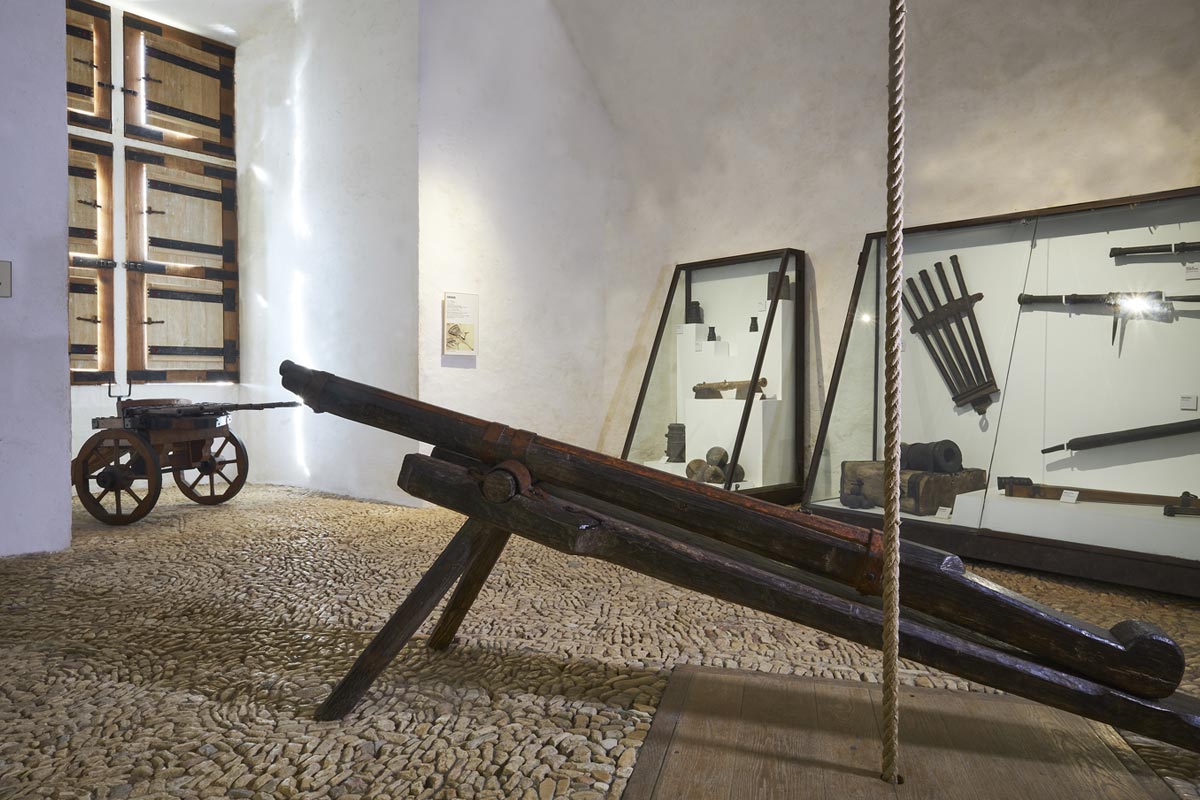 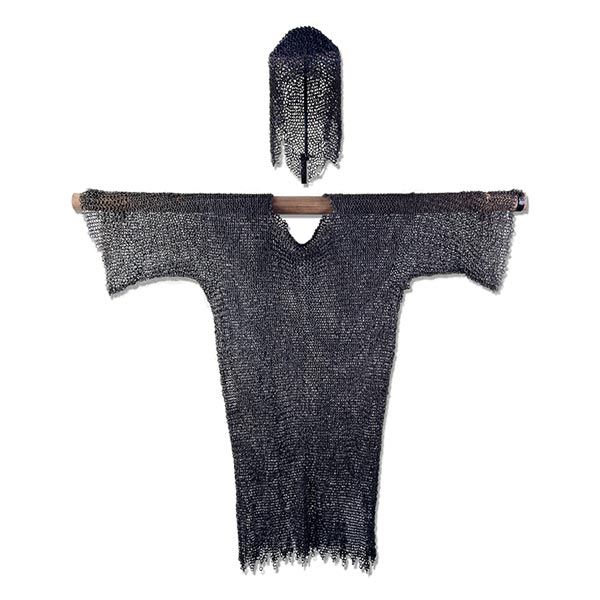 Starting in the 12th century, soldiers were protected by chain mail and a camail (collar of mail). When weapons became more advanced, plates of wrought iron were attached to the chain mail to reinforce the protection of some of the body’s vital parts. 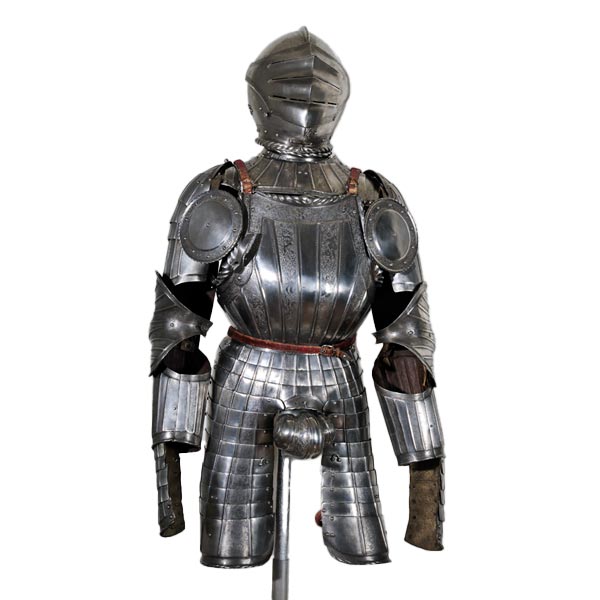 Starting at the end of the 14th century, elements of armour began to replace the metal plate-covered chain mail and the helmet with visor replaced the helm. In the 15th century, the white harness (full armour whitened from buffing) became more widespread. Entirely articulated and adjusted to the knight, it protected him from head to toe. Its use continued until the 17th century, when body protection became more a reflection of personal aesthetic tastes. 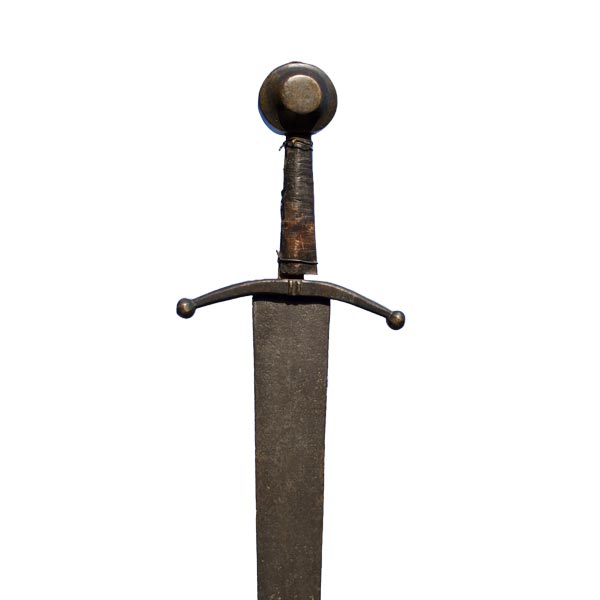 The sword, symbol of power and justice, was the knights’ weapon of choice. Soldiers, priests and civilians were also armed with them. Designed to cut and stab, it was used both for fighting and hunting. Handling it required technical training from a weapons master. Its design evolved over the course of the Middle Ages. 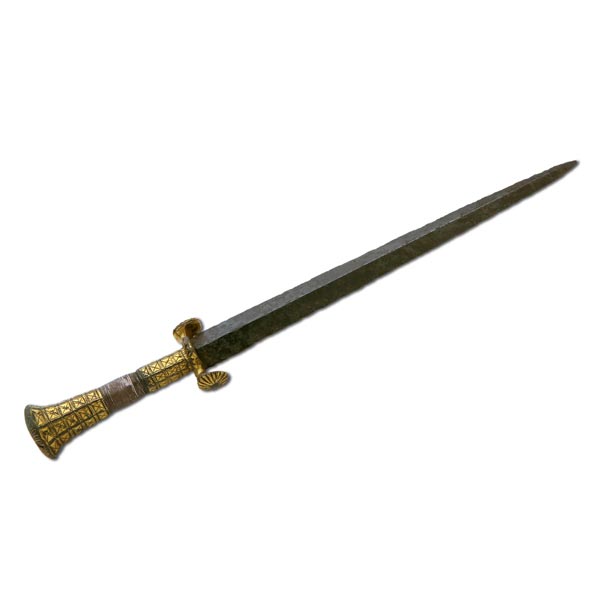 Civil and military weapon, the dagger was worn at the belt. Easy to hide because of its small size, it was the traitor’s weapon. Archers wore them to administer the coup de grace once their opponent had fallen. The names for the daggers varied depending on the shape of their crossguard: rondel dagger, ballock dagger or a quillon-dagger like the one presented here with a skilfully wrought hilt of refined workmanship. 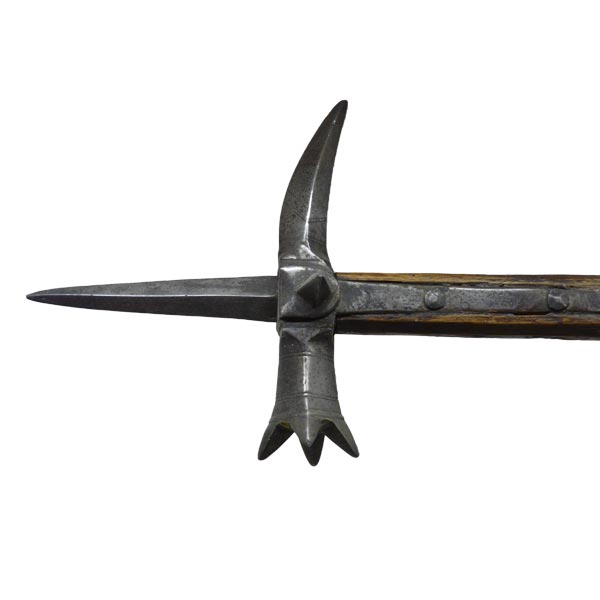 With a “raven’s beak” or bec de corbin, set opposite a four-pronged head for clubbing, this poleaxe was a powerful and piercing weapon. Extending from the shaft, a long dagger allowed for it to be thrusted like an estoc. Conceived for hand-to-hand combat, it prevented the enemy from moving by blocking the joints in his armour. 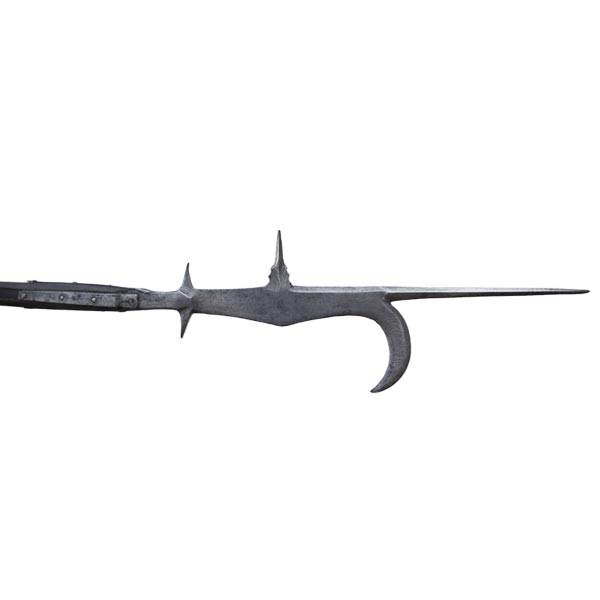 Staff weapons were used by the infantry. The tips, of varying shapes, are fitted to a wooden shaft, of which the length varies from one weapon to another. These weapons allowed foot soldiers to hamstring the horses, to penetrate between the armour’s plates and even to knock down and stab the horsemen. Their names vary depending on their shape: halberd, bill, vouge, or guisarme, the name of the piece presented here. 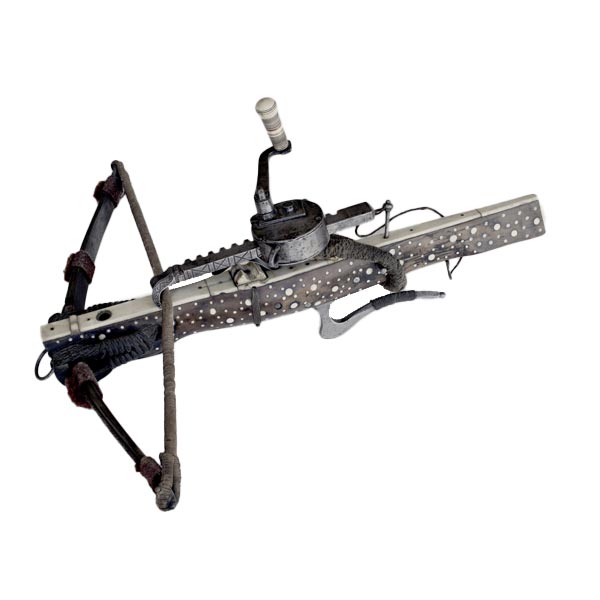 Date: 16th–17th century
Weight: 3.92kg
Origin: Germany
Characteristics: metal bow, wooden stock covered on top by bone and incrusted on the sides with circular motifs also made of bone; the metal cranequin was attached to the stock by a loop of cord.
Inv. N°: ARB-2019-002

The crossbow is a powerful, silent and precise weapon. It was used as much for fighting as for hunting. Very widespread in medieval times, the weapon-makers constantly tried to improve it. The model here loads with the help of a cranequin that the men wore at their belt. This crossbow winder was used to draw the bow string and allowed for the weapon’s use by horsemen.

The ribaudequin, or organ gun, is a powder weapon capable of firing salvos over a wide range of the battle field. It is ignited from behind thanks to a rail that links the vents of the 12 barrels. Drawings by Leonardo da Vinci have allowed for the reconstitution of this weapon’s wooden carriage. The cannons themselves date from the 16th century. 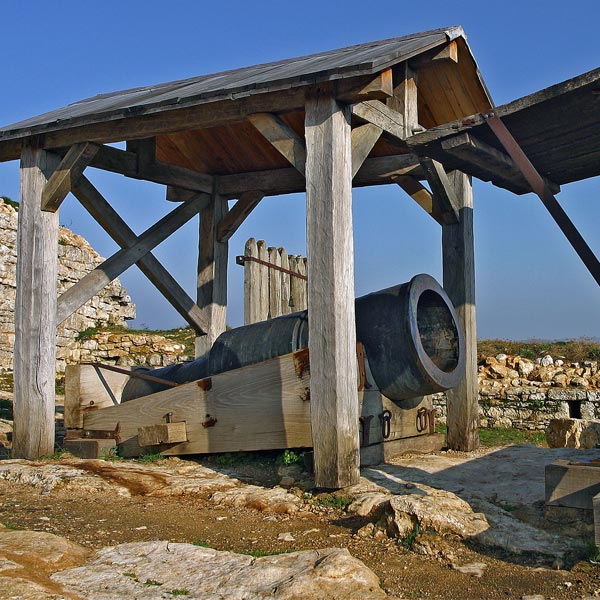 The first firing weapons using gunpowder were developed in the early 14th century. The bombard is the most imposing. Made of wrought iron, it weighs several tons. This one was made using a cast of a bombard from a Touraine village (La Chapelle-aux-Naux) today kept at the Musée de l’Armée (Les Invalides) in Paris.

Castelnaud Castle presents exceptional, life-size reconstitutions of siege engines from the Middle Ages. All the artillery, whether traction powered or with counterweights, was made out of wood and few have survived to the present day. The only printed sources that allow for their reconstitution are account books, miniatures, collections of drawings and treatises by military engineers from the 13th and 14th centuries such as Villard de Honnecourt and Konrad Kyeser. Medieval iconography was meticulously studied to allow for the recreation of full-size machines. 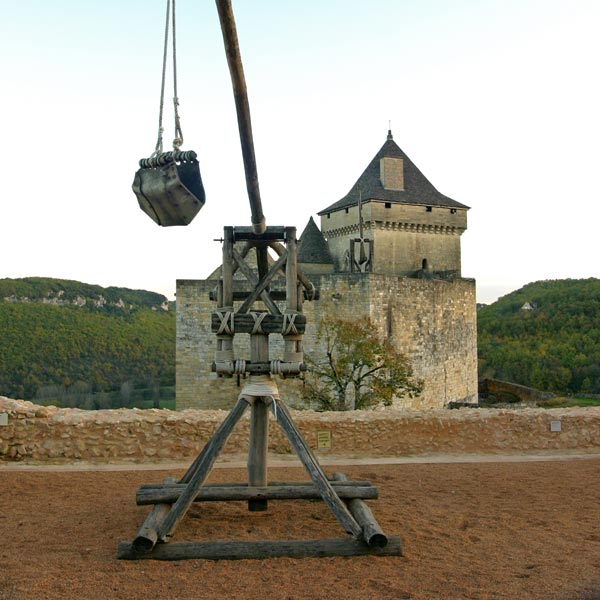 This “human traction” machine is the least powerful of the siege engines. The men pulled on the ropes to swing the arm and launch the stones. Considered more a machine for defence, it was very effective against attacks. The reconstitutions have demonstrated that a one-kilogram ball reached its target at 140 km/h. 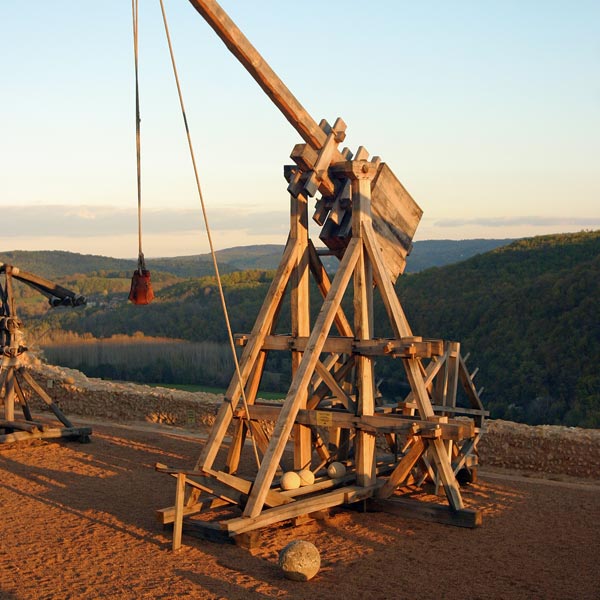 Appearing near the end of the 12th century, this machine has a fixed counterweight weighing several tons. Engineers had not yet understood the advantage of articulated counterweights, with which the trebuchets would later be equipped. 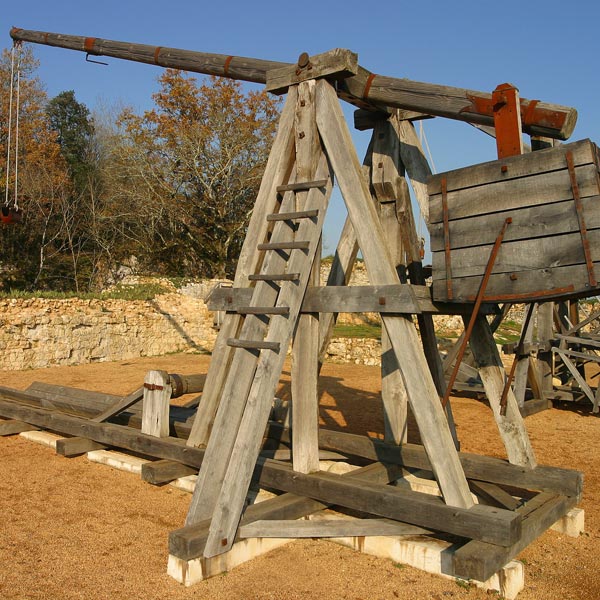 Equipped with an articulated counterweight, this machine was used up until the 16th century. Despite a slow firing rate, one to two shots per hour, it was the most powerful and most precise machine of the Middle Ages. Just the sight of it was enough to make most people surrender. 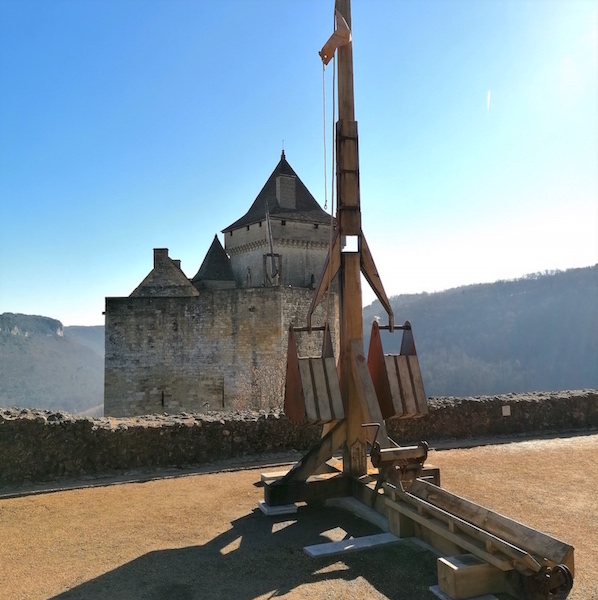 Smaller than the trebuchet, the Couillard is faster and requires less manpower. It was, without doubt, the most successful war machine of its time. 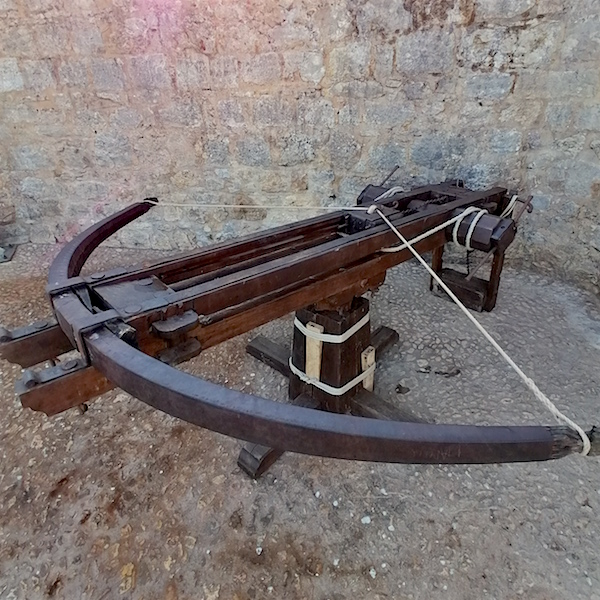 This giant crossbow, installed in a fixed position, was used to defend strongholds. The machine’s advantage lies in its precision and range of fire: 300 metres for a 1-metre bolt.The original stock, used for this reconstitution, dates from 1336. It is kept at the museum of Quedlinburg in Germany.